Some of our games are available in english, these are : 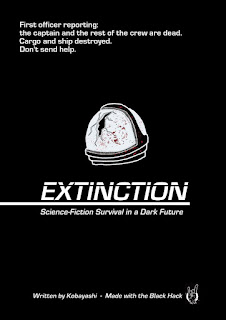 EXCTINCTION is a stand alone RPG of Sci-Fi survival horror made with the BLACK HACK, inspired by movies like Alien, Outland and Event horizon.

Players can choose a character class, from Corporate drone to Medic or Deck officer (8 classes in total), read a 1 page summary of the setting, pick a rules cheat sheet and start to play right away.
GMs will find an introductory adventure, Breathing Day, so they can start running the game on the same day they bought the book!

Keeping with BLACK HACK traditions, EXTINCTION is loaded with tools: create NPCs, colonies, space stations, alien ruins, find what's wrong with a corporation or the next target of a fringe group... It's a big universe and xenomorphs are not the only danger players will face.


Buy it at Drivethru RPG

RATS IN THE WALLS 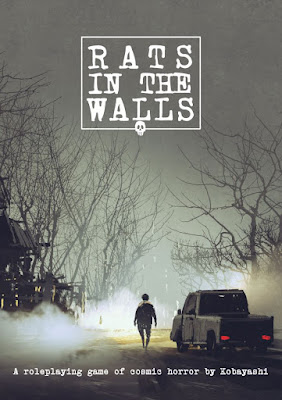 Rats in the Walls is a roleplaying game of cosmic horror, inspired by the writings of H.P Lovecraft (but it doesn't use HPL's Mythos).

The game system is inspired by classics like Advanced Fighting Fantasy, Traveller and more recent titles like Maze Rats or Into the Odd. It uses 2D6 and only the players roll the dice so the GM can focus on the players' choices.

The system is aimed at long-term play but works very well with one-shots as well.

The default setting are the roaring 20's but an appendix allows you to create medieval characters.
So grab a character sheet, 2D6, pick a profession and a reputation and go fight the Old Ones or die screaming.


Buy at Drivethru RPG or Buy at Lulu


A SOCIETY OF UNLIKELY GENTLEMEN 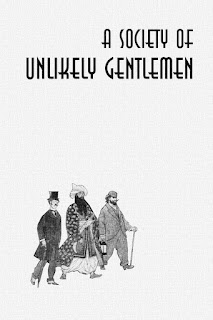 1895. Five years ago, the city of Atlantis rose from the depths of the ocean. At the same time, several portals appeared on Earth and allowed safe passage to Venus and Mars. Within the next year Atlantis opened diplomatic relations with almost every nation on Earth. Railways were built to allow travel to Mars and Venus through the Atlantean portals. Scientific marvels pop-up everywhere, four-armed martian ambassadors walk the streets of London while Venusian amazons guide big game hunters through the jungles of their planet. Empires still scheme and fight among themselves, looking for new technologies to gain the advantage over their rivals.

You will play adventurers and explorers, always looking for new scientific discoveries, uncharted territories or lost treasure, to quench their thirst of knowledge, fortune and fame. Just bring 2D6 per player and you are ready to go !


The quickstart is pay what you want on Drivethru

Shell Shock has been awarded the best 2010 Alternative RPG award by the French Roleplaying Games Federation.
Runner up for the 2008 best free indie rpg award

Shell Shock puts you in the role of young recruits sent to the frontlines. Facing the hardships of military life and war they will have to make tough choices to survive.
Shell Shock is a set of rules which will allow you to tell the stories of these soldiers. There are no predetermined setting. You can tell the stories of US soldiers confronted to the horrors of the Korean war or the lives of guerilla fighters on the Polar front of the Mars independance war of 2135. Whatever the setting, the question remains the same : how far will they go to survive ?

"the game is pure genius, the best narrative game since The Mountain Witch"
Galadrin on rpg.net

Once upon a time there was a small contest at the Storygames forum : Write a game based on a category of exploitation or grindhouse movies in (about) the next two weeks. Entries are due by the end of the Halloween weekend. I'm happy to say I won the contest with this entry, heavily inspired by John Carpenter's Escape from New York and David Cronenberg's Scanners.

A new character sheet, a GM cheat sheet, an improved equipment list and a random-spell list for faster chargen, a scenario set during world war 2 (The Thin Dark Line), another one set in the wild west (The Good, The Bad and the Disciple).

An alternate setting inspired by the mangas Claymore and Berserk : Shadow Crusade.